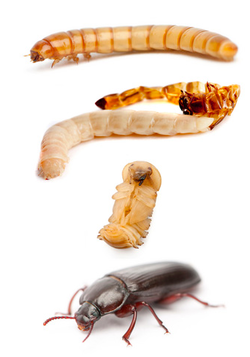 A mealworm goes through a complete metamorphosis. It has four distinct stages of life.
The four stages are egg, larva, pupa, and adult. The amount of time a darkling beetle spends in each stage can vary greatly due to environmental factors like temperature, humidity, food, and water.


Stage One: Egg
It is white and shaped egg, it's tiny and about the size of a speck of dust. The egg is sticky and is quickly concealed by dirt and dust. It takes around one to four weeks for an egg to hatch into the larva.

Stage Two: Larva
This is the mealworm stage! This stage lasts for eight to ten weeks. When first hatched, it is quite small but will grow to be about 2-3.5cms long. In this stage the mealworm has a hard exoskeleton, and will need to molt and shed its outer shell in order to grow. Molts will occur ten to twenty times during this stage of life.  A mealworm spends its time eating and growing in order to save up energy     for the next transformation.

Stage Three: Pupa
During a mealworm’s last molt it will turn into a white alien-like pupa. The pupa is quite helpless and the only movement it can do is wiggle. This stage of life will last one to three weeks as the pupa transforms its organs and body into an adult.

Stage Four: Adult
The final stage of the insect’s life is as the darkling beetle and lasts one to three months. The beetle will be white with a soft exoskeleton. As the outer shell hardens, it will turn brown and then black. The beetle has wings but can't fly. After about one to two weeks of adult life, beetles will begin to mate and reproduce. A few days after mating, female beetles will burrow into soil and lay eggs. Female Darkling Beetles can lay hundreds of eggs during their adult lives.


Image above retrieved from http://mealwormcare.org/life-cycle/ 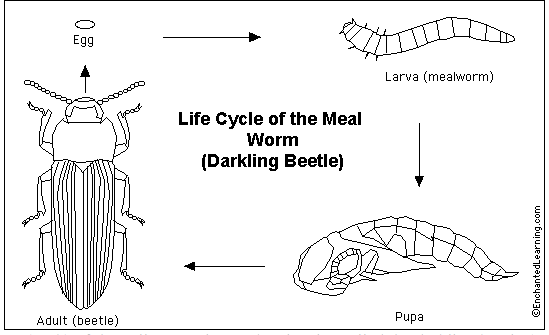 Life cycle of a mealworm (darkling beetle) image retrieved from www.enchantedlearning.com
Powered by