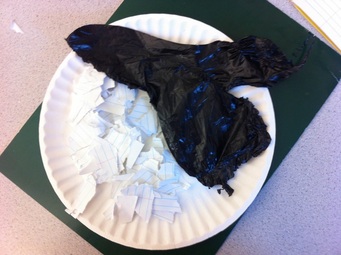 Hypothesis: We expect the mealworm to prefer the plain paper plate without any extra texture. Based on our observations we noticed that mealworms have legs so we were interested to see if they could grip to a garbage bag.

Conclusions:
The mealworms have a difficult time moving on surfaces such as plastic since they can’t grip onto the material. The mealworms did not overly show a preference for different surfaces but rather hid under the surfaces. 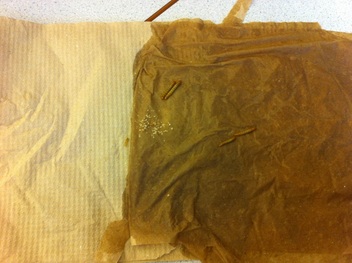 Findings:
1) Four mealworms immediately preferred the dry paper towel, but after 35-43 seconds 2 moved from the dry area to the wet area, and continued travelling along the wet paper towel.
2) Four mealworms did not move, they stayed in the middle on both the wet and dry pieces.

Conclusions:
There were no obvious preferences to wet or dry although we predicted they would go to the dry area. They never stayed still, they continued to wander and explore. They may have gone to the wet area since they like water rich foods.

Procedure:
1) We put 9 mealworms on a paper plate.
2) We covered half the plate with a dark folder and the other side had a flashlight shining on it.

Findings:
8 of the 9 mealworms went towards the dark side, the other mealworm was trying to escape the paper plate/ flashlight. We then switched the light and dark sides and found that the meal worms also switched sides and all 9 went to the dark side.

Conclusions:
This experiment was very conclusive, mealworms prefer dark locations. This has many implications in further experiments we did.

4) REACTION TO TOUCH
Hypothesis: We expect the mealworms to react negatively to touch, we expect that they will attempt to avoid touch by objects.

Procedure:
1) We put 9 mealworms on a paper plate.
2) We used a toothpick to gently touch them on the antennae and recorded their reaction to touch.

Findings:
All 8 mealworms reacted the same way, they all recoiled when touched with the toothpick.

Conclusions:
This experiment was conclusive as all the mealworms reacted the same way. They are sensitive around their antennae and do not care to be touched. 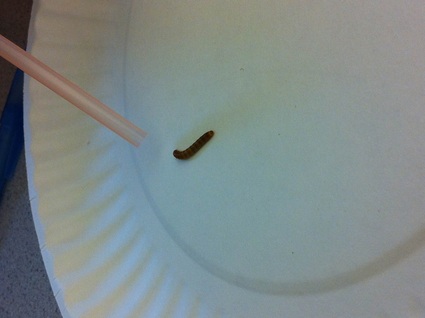 5) REACTION TO AIR
Hypothesis: We hypothesize that the mealworms would respond negatively to the feeling of blowing air.

Procedure:
1) Place 8 mealworms on a paper plate
2) Gently blow  air through the straw onto the mealworms and observe/record what happens.

Findings:
All 8 mealworms reacted to the stimuli of air in the same way. All mealworms moved away from the blowing air.
Conclusions:
Based on this experiment we are able to conclude that mealworms do not like blowing air and prefer to be left alone. 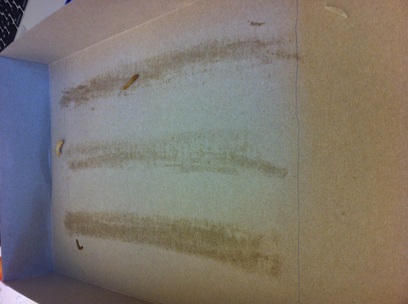 6)  MEALWORM RACE
Hypothesis: We predicted that the larvae would be faster than the pupae.
* Our first attempt at a race was unsuccessful as the mealworms had no reason to crawl to the other side of the box. We had to smear a piece of apple along the expected path. As a result the mealworms followed the path and we were able to see what mealworm was fastest.

Procedure:
1) Measure the distance of the race on the shoebox (30 cm) and mark the starting and finishing line.
2) Smear a piece of apple in 3 different columns (one for each racing mealworm).
3) Place a mealworm at each starting point (one pupae and 2 larvae).
4) Time the duration of the mealworms to reach the finish line.
5) Repeat steps 2-4 for reliable results.

Findings:
The larvae #2 won each race with larvae #1 finishing shortly behind. The pupae hardly moved and did not finish the race either trial. The larvae mealworms moved quickly at the beginning of the race and slowed down as they approached the finish line. We hypothesized that they did this because the apple was drying up and they had no incentive to continue along the race track.

Conclusions:
Based on these races we concluded that the larvae phase of the mealworm lifecycle is much more active than the pupae phase. We also concluded that there must be an incentive for mealworms to move, in our case this was food. 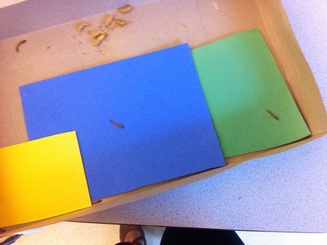 7) PREFERENCE TO COLOUR
Hypothesis: Based on our observations and results from previous experiments we hypothesized that the meal worms would prefer the darkest color and try to go underneath the paper (where it is darker).

Procedure:
1) Place 3 pieces of different coloured paper in the shoebox.
2) Put mealworms in the box.
3) Observe and record where they moved to during the designated time (1 minute).

Findings:
We found that of the 7 mealworms used that 6 ended up crawling underneath the coloured paper and the one remained mealworm was walking on the blue paper. Initially all the mealworms moved towards the darkest paper (blue) and then tried to move underneath the paper.

Conclusions:
Based on this experiment we can further conclude that mealworms prefer dark surfaces, areas.

*Sources of Error: We should have had 3 EQUAL sized pieces of coloured paper as the different sizes could have influenced where the mealworms moved to. Also we should have stapled or ensured that the paper was in place and that the mealworms could not move underneath it. These adaptations would have provided us with more accurate results. 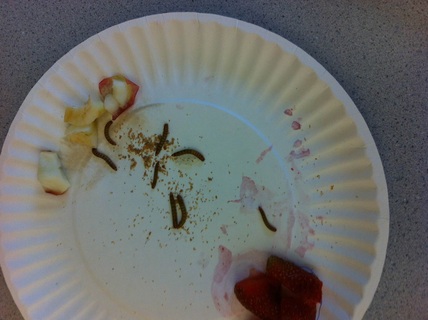 8) FOOD PREFERENCES
Hypothesis: We hypothesized that mealworms would like and be more attracted to strawberries than apples.

Procedure:
1) Cut up small pieces of the strawberries and apple.
2) Place these pieces on opposite sides of the paper plate.
3) Put mealworms in the middle of the plate and then observe and record what you notice about their preferences.

Conclusions:
Based on our experiment we did not have conclusive data but were able to speculate that mealworms prefer apples to strawberries. This was a bit counterintuitive to us and went against our hypothesis. We had predicted that the mealworms would prefer the strawberry because there were more juices.

*Sources of Error: We should have used a variety of foods to determine if mealworms actually prefer apples overall or just in comparison to strawberries. We could have tested citrus fruits or other berries.
9) REACTION TO LOUD NOISES
Hypothesis: We hypothesize that mealworms will react in some way to loud noises.

Procedure:
1) We placed 8 mealworms on the paper plate and waited for them to settle and stop moving a lot.
2) Once the mealworms were settled we began to play music. The music increased in volume throughout the song.
3) Observe and record mealworms reactions to the music.

Findings:
Initially, when the song first began the mealworms did not react in any major way. As the music continued and the bass and volume increased the mealworms started to move around. The seemed disturbed by the increasing volume of the music. They may have been reacting to the vibrations caused by the music.

Conclusions:
Based on this experiment we were able to accept our hypothesis that the mealworms would react to the noise in some way. We noticed that they reacted more when the volume and bass were increased.

*Sources of Error: We could have tried different genres of music and different volumes to determine whether the mealworms were reacting to the volume or the specific characteristics of the music, such as the bass. 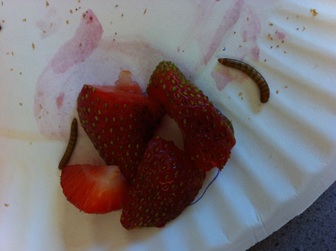 10) STRAWBERRIES OR NO STRAWBERRIES?
Hypothesis: We hypothesize that the mealworms will be attracted to the strawberries, if that is there only food source.

Findings:
At first the mealworms tended to walk around in no particular direction. They then moved toward the strawberries. They tried to hide underneath the strawberries rather than use it as a food source.


Conclusions:
The mealworms liked the presence of the strawberries because they provided a dark area (underneath). This experiment further concluded that mealworms are more attracted to dark areas.
Powered by